The Southlake Mall, in Morrow, Georgia, a southside suburb of Atlanta, is doing far better than many will tell you. While it wasn't avoided by the "white flight" phenomena that deeply affected Atlanta, the people that too many suburbanites would call "unsavory" have taken the mall and led it to heights many malls would wish to see today. Too many people will also tell you that this mall is struggling, or that its been long dead and in need of revitalization. But this is very far from the truth. The mall that I saw on the Saturday evening I was there was one of hustle, bustle, and shopper-filled corridors of success. While there may have been some bumps on the road to where Southlake is today, the mall stands on a solid lineup, a loyal customer base, and an excited, energetic vibe that many malls fail to capture today.


Southlake Mall opened its doors in 1976 with all the standard details of other Atlanta malls. National retailers Sears and JCPenney took up anchor spots along with homegrown Rich's and Davison's. Southlake Mall was the first major mall to be built on the deep southside of the city, and this distinction led to early success for the mall. This success was crucial for the mall to have, as only four years later the Shannon Mall was built ten miles away in Union City. But thankfully, the fast-growing pace of the southside allowed for two malls at the time, though obviously this pace couldn't keep on forever, and such a truth would cause potentially devastating reparations for the malls involved.


While two malls in a somewhat short distance from each other worked for a little while, competition would begin to get the best of one of the malls. Both malls' had their Davison's become Macy's in 1986, but the Macy's at Shannon Mall was bested by its nearby Southlake store and closed in 1999. This would be the beginning of the end of Shannon Mall, and with even more pressure from Arbor Place and Ashley Park, the mall closed in 2011 after years of decline. While seeing a mall get swept off the map is never a good sight, without Shannon's decline and the expansion of Southlake's trade area, who knows how Southlake would have fared in the recession. This turn of events definitely helped the mall, but even when the mall should have been thriving without flaw, major issues began to develop behind the scenes.

Throughout the early years of the mall's life, as suburbs would usually be, the area was primarily middle-class white. Because of this, the mall could have early success and was clear of demographic issues regarding the immediate area. But as Atlanta continued to move farther south with new suburbs, whites began to head with the wind, causing a phenomenon known as "white flight." Also, with the main economic engine in the neighborhood being that of industrial work, minorites picked up where the whites left, and with this shift came a definite shift at Southlake. While at that point the mall had been like any other suburban shopping center, the fact that some whites felt wary of visiting the area left a mark on the mall. The mall became more of the urban type, with mom-and-pop and urban wear stores taking over where chains left. Though with the population to support it, this change became a boon to the mall, and things picked up at the same pace as they normally would. If truly anything, this shift helped the mall, giving Southlake an edge and something different from the other Atlanta malls. And with issues still to come, Southlake would need this edge more than ever.

Yet, while all this was happening, Southlake had to deal with yet another concerning front : consolidation and anchor closings. While Davison's got the ball rolling in 1986 in becoming Macy's, the effects of this wouldn't come until some time later when in 2003, Rich's began the process of turning into Macy's. Macy's didn't want to keep two stores open, so while the Rich's became Macy's, Macy's moved out of the original Davison's and into the Rich's store. This effectively left one anchor closed, but more was yet to come. In 2011, JCPenney left the mall, giving Southlake two vacant and two full anchor slots. Fortunately, over the next couple of years, these vacancies would be refilled, with a conference center occupying the old Davison's and Chime Solutions, a customer contact company, filling in for JCPenney, It also got a small boost when Forever 21 occupied a section of the old JCPenney, and H&M also took up some space recently, helping round out a mall desperate for fashion anchors. While Southlake rolled successfully with a two-anchor look for a few years, another hit was taken when Sears announced their closure at the mall in June 2018. It is so far unknown on what will replace the store.

While replacing the previous two closed anchors with non-retail entities was a successful move for the mall and helped it last through the past few years, whoever replaces Sears absolutely needs to be a proper anchor. I don't really have confidence in a discount store here as it wouldn't help the "urban" feel that the mall has been stuck to, and there's already a Roses, a Burlington, and a Fallas nearby. The only problem is that the options are deeply limited here. Anything more upscale than Macy's has nearly no chance of opening in the space. If Belk didn't open at Stonecrest when it had the opportunity, it isn't going in here. JCPenney is struggling, and somehow Dillard's doesn't feel right for the space or the mall as a whole. Owners will likely have to get a little unconventional to replace Sears. Yet, I think it's possible. Entertainment could be a boon for the mall, as the crowd could fit with it and the mall doesn't have anything to fit that bill yet. In my opinion, a reachable scenario for the mall could be having a large-scale entertainment complex on the first floor (think go-karts, bowling, arcade, etc.) and a grocery store on the second. Now, while a Kroger in a mall seems wild and right out of the 60's, Kroger did seriously toy with opening up in a section of the Cumberland Mall Sears a couple of years ago. Both of these replacements are pretty reliable and could bring a lot to this mall, so if I was the owners I would head off in that direction. An empty anchor doesn't help anyone.


Southlake Mall has always been resilient, though such a trait may be needed more than ever now. Southlake has nearly overcome everything through its lifetime, but today the mall must peel off the dead skin and begin a new era. However, the owners must make the correct moves here for success. In today's landscape, making a bad move can easily knock off a mall, and Southlake is in a vulnerable spot. Though long an underdog in the Atlanta shopping culture, these next years could make or break the 42 year-old mall.

Ames, Iowa is a thriving college town about 30 miles north of Des Moines, the capital and largest city in the state. Not only does the city house the Iowa State University, the area's largest employer and source of over half the city's population, Ames is the largest town between Des Moines and Minneapolis. It's also a successful one at that, posting a 2.1% unemployment rate and stellar growth rates as of late. It's mall, the North Grand Mall, could be said the same. It's a mall that's been doing as well as its location, with little vacancies and sustained success.

The mall has been remarkably unchanged since its opening in 1971. The opening anchors were Sears, JCPenney, and Des Moines-based Younkers. Only Sears has changed since then, being divided into a Kohl's, TJMaxx, and Gap Outlet in 2008. Even the interior of the mall itself has only received one renovation as far as I can tell. This renovation came in 2006, and there are still plenty of vintage elements that fell through the cracks. The biggest news coming to this mall in a decade was announced earlier this year. Younkers' owners, Bon-Ton Stores entered Chapter 7 bankruptcy in February, spelling the end of the historic department store, and later on, conglomerate. Younkers is a part of this conglomerate, meaning that the North Grand store will be closing in August 2018. Will the store be replaced with the same success as the former Sears? Only time will tell.


While North Grand looked great on the day I visited (and it's overall doing well), with constant crowds and only two vacancies, the mall seems to be weakly fitted for the future. Not only is an anchor closing, but there was really no major draw that I could sense in the area. While the stores themselves would help bring in the masses from the smaller towns around Ames such as Boone and Nevada, there's not much of a draw for Ames or Des Moines residents. The only entertainment comes in the form of a small theatre that has been operating on and off through the years. A thirty-minute drive on I-35 brings you to more diverse shopping and entertainment in the capital, and numerous other draws. While a major university nearby gives the added benefit of thousands of students to draw off of, a bored college student may choose to rather spend a day in Des Moines instead of at the mall in Ames. In this case, perhaps North Grand is simply too small.

While expansions can be dangerous, risky, expensive, life-saving, and all in between, it almost seems like the only way to go is up. And by that, I mean that we need a second floor. This floor would consist of a proper food court, a proper theater, more entertainment, and of course more stores. Of course, this expansion wouldn't have to stretch the whole mall. It may only go from TJMaxx to center court. But the point is, this mall will struggle if it doesn't adjust to today's standards. Oh yeah, and find a replacement for Younkers. Easy stuff, right? I've had many retail hot takes, and this could be my hottest yet, but something has got to be done. Might as well do it while the mall is alive and thriving. 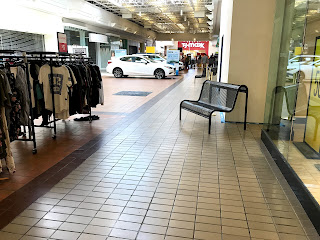 North Grand is currently a healthy mall, but where does the future lead? This mall will be an interesting one to watch over the next decade. Does it improve, stay the same, or hit tough times? The mall seemed middling to me on my trip, but does that affect the future? How will anchor changes affect the mall? This is a mall of many questions, and the future will tell how these questions will be answered.